The only female member of Sleipnir, referred to as the "Spring of Life". Freya has cat-like ears on the top of her head, a fact which confuses Kazu somewhat before the match with Kogarasumaru. She also makes cat-like noises and gets angry when Kogarasumaru examines the planes, though she is berated for this by Loki. Like Loki, she carries around a sword, albeit a slightly smaller one.

Freya has light blond hair.  She has a very curvaceous figure and large breasts.  She also displays cat-like features by sporting cat ears and sometimes, she is shown having a cat's tail.  Freya wears a skin-tight robe and blouse.  Sometimes, she is seen wearing nothing but a simple white bra and thong.

In the match against Kogarasumaru, it is her plane that runs out of fuel first, so she escapes by transforming her sword into some sort of special AT umbrella, allowing her to seemingly drift on the air. Freya seems to be also be able to use the umbrella as a shield, as seen when she deflects a barrage of fangs fired by Agito. Later, she's seen attempting to fend off Onigiri on her new plane. Amusingly, she even has her own fanclub, though composed mostly of overweight otakus(similar to Onigiri). After her opponent Onigiri was taken out by Ikki and Agito, Freya proceeds to join Loki on his plane. Standing beside him and over Ikki's exhausted body, she sings:

"Where did we come from? Who are we? Where are we going?" as Loki requests that Ikki answers these questions.

Later, she teams up with Loki against Ikki and Buccha, mostly acting as support. When Ikki activates his Null Wind technique, she finally falls victim to Onigiri's trick and becomes unconscious, forcing Loki to save her and forfeit the match to Kogarasumaru.

In the previous GST, she had notably much shorter hair as compared to now.

As a female member of Sleipnir, Freya is the only known Wind Queen. Her R.E.A.D. battle level is 136. In addition, as a Brain Charger, she has access to their innate abilities.

Asgard's Bifrost - Using her umbrella and some mechanism in her ATs, Freya is able to walk over the smoke trails(or even air itself), created by the planes in the battle against Kogarasumaru.

Dance of the Einherjar Sword - By rapidly twirling her umbrella above her head, Freya creates a massive, powerful tornado that can easily rip apart the plane they where fighting on in an instant.

Nibelheim Blizzard - Its abilities are unknown, but it is described as a trick which allows Freya to maintain her posture to maintain "Dance of the Einherjar Sword". 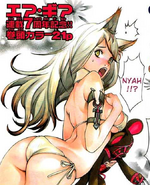 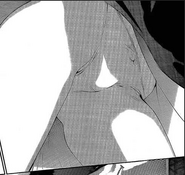 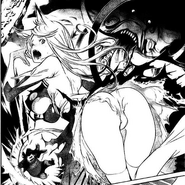 Freya being stripped and showing her goods.

Freya's underwear being pulled down
Community content is available under CC-BY-SA unless otherwise noted.
Advertisement