Gazelle (ガゼル, Gazeru), called Gaze by Kaito Wanijima, was also known as the "Virgin Blade" and the "Wings of Beginning" is the original Thorn Queen, a first generation Gravity Child and Brain Charger. Such as Kilik and Sora, it would seem she was part of the original group that escaped the Tower of Trophaeum. She was found by Kaito 10 years prior to the current storyline, and the two developed a romantic relationship before her death. Dr. Minami has called her his greatest masterpiece.

Gazelle, being the mother of Agito/Akito/Lind Wanijima, shares many similarities in appearance to them. Gazelle had a slender build and shoulder-length, dark blue hair appears to have the age of a teenager.

Gazelle was found by Kaito Wanijima in an injured state after running from Nike, 10 years prior to the current storyline, when A-T's were virtually unheard of. Gazelle claimed to have no memories when Kaito found her (the only thing she knew was her name, 'Gazelle' - although later she also seemed to remember Dr. Minami) and her A-T's were her only possession. As a result, Gazelle began to mimic Kaito and took on a lot of his personality traits, and eventually fell in love with him. A sentiment which he reciprocated.

Later, when Nike found her again, Gazelle revealed that she is a Brain Charger. She battled Nike and seemed to gain an upper hand, but lost when faced with the combined powers of both Nike and Sora. Kaito rescued her from the encounter, aided by a Air Trek Armour given to him by Dr. Minami.

The two fled Japan, intending on slipping away to Russia, but while stranded on the glacial zone that connects Japan and Russia, the two were finally tracked down and cornered by the Takeuchi brothers who had put out a reward for information regarding their location. Facing their imminent demise, Gazelle committed suicide by shooting herself with Kaito's gun, ensuring the Takeuchi brothers did not attain the her part of the 'poem' or Quantum Code need to activate Sky Regalia they sought from her.

From her corpse, the Takeuchi brothers recover her Core of her Thorn Regalia. Later, Dr. Minami reveals that he was able to retrieve her body from the sea, which the icy temperatures had preserved. He claims to have used the laboratory he is in to revive the child within Gazelle, revealing that Gazelle was pregnant. Agito/Akito/Lind Wanijima is revealed to be the child of Gazelle and Kaito.

At the end of the manga, it is said that there were plans to separate the personalities within Agito/Akito/Lind's body using Dr. Minami's research and put them into different bodies, but she would be a baby, causing Kaito to fall into temporary depression.

Although little has been shown of her skill as the original Thorn Queen of the Sonia Road, Gazelle was most likely skilled rider as shown when battled Nike, seemingly gaining an upper hand in their fight. The fact that Nike acknowledged that it would take both him and Sora to take Gazelle out, can be seen as testament of her skill. This, combined with the fact that Lind, who is the strongest of the three personas inhabiting the body of the current Fang King has Gazelle's abilities and memories. Gazelle was the first person who tried combined the Bloody and Sonia Roads, by combining her own tricks and Falco, the original Fang King's tricks.

As rider of the Sonia Road Gazelle has shown great flexibility, nimbleness and maneuverability, but not the burdens on the user's body. Gazelle's A-T's were the original Thorn Regalia, after her death passed on to normal riders, and eventually, Rika Noyamano but the Regalia's core was removed by the Takeuchi brothers. It's current location is unknown. Like Rika's and Ringo's first Regalia, a whip is connected to A-T's Gazelle's whip resembles a chain and seems to function similar to chains used by Agito, Akito and Lind. 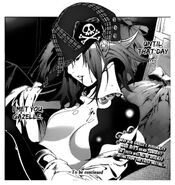 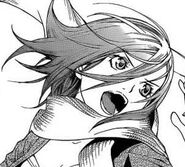