/*put yes if the character has a gallery, and leave it blank if they don't/
Noyamano Shiraume (野山野 白梅, Noyamano Shiraume?), known as Ume to her family, is the youngest of the Noyamano family and a member of Sleeping Forest.

Her hobby is the creation of puppets in the guise of gorgons (which creeps out Ringo and Ikki to no end), and she's always seen carrying one with her. She sings "Prickle prickle, pull pull, stuff you with cotton till your belly is full. Pull pull, snip snip, cut out your flesh from the head to the hip. Snip snip, sweep sweep, pick up the needle and drive it in deep. Take all the pieces weathered and torn, sow them all up and then you are born." when creating her gorgon puppets.

Other than that she's also quite handy with machines despite her age. She even manages to build several creations to replace Ikki's A-T's, while under the influence of Mushrooms.

She's the one who introduces Kogarasumaru to Kei Machida, the pro emblem designer who designs their team logo. She is supposedly the weakest member of Sleeping Forest in terms of A-T fighting skills. She is also sometimes sarcastic. Her latest appearance involves her revealing herself as a Gravity Child. She is able to successfully attack Ikki, something she could never achieve in normal gravity, due to both his underestimating her and his inability to adjust to the gravity-less area they were in.

Ume is a King-level Storm Rider, despite her age and diminutive appearance. Although her Road has not yet been revealed, she appears to specialize in tuning and tinkering, suggesting she is Sleeping Forest's equivalent to the Pledge Queen. However, unlike Kururu Sumeragi, she is also a very capable rider, as seen when she easily defeats Ikki in a zero-gravity environment (the Tropaion Tower).

Infinite Scale - During the infiltration of Yasuyoshi Sano's compound, the machine she and Kururu were riding was destroyed by Aikawa Taeko using a version of the Time technique. Working together, Kururu and Ume were able to repair it before the pieces hit the ground; afterward, Kururu states that she's never seen someone who can "do the same thing" as she does, implying that Ume can access Infinite Scale. 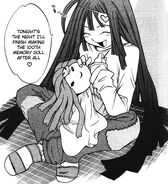 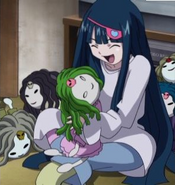 Ume sings to herself as she sews

Community content is available under CC-BY-SA unless otherwise noted.