Tropaion Tower is a tower in Air Gear that is used to symbolize the storm riders' struggle to reach the top. In the manga, it is later revealed that Tropaion Tower is actually a big geo-thermal research center, located on Mt. Shinonome.. The entrance is located in Tool Toul To's base and is also Sleeping Forest's HQ. It is located in a gravity-free module of that plant and is where the first generation gravity children originate. The Sky Regalia is also located somewhere in that tower. It was built over 30 years before the start of the series.

In the vertical cave, a track formed by a large amount of volcanic magma passing through, allowing water to flow into the shaft. Water changes into gaseous form as it passes through the magma pools and rises to the surface where it cools, condenses, and flows underground again. The turbine located in the tower harnesses the energy of this rise-and-fall motion. It costs virtually nothing to run this machine and is often referred to as the 'Eternity Machine'. 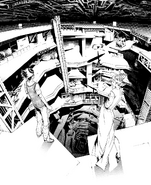 Entrance to the tower

Inside of the tower

Gravity-free module, rebuilded by the new Sleeping Forest
Add a photo to this gallery
Retrieved from "https://airgear.fandom.com/wiki/Trophaeum_Tower?oldid=13714"
Community content is available under CC-BY-SA unless otherwise noted.