The Wind Regalia - Moonstruck Drop Bagram is capable of "riding air" granting the users ability to fly. Depending upon its current form, it is capable of creating gusts of winds or even larger tornadoes. Thus, the riders road is named Wing Road.

It was first used by the Takeuchi Brother's, Sora and Nike, as they are Gravity Children. Later on, Sora was entitled the Wind King of the Old Sleeping Forest and was passed down to Minami 'Ikki' Itsuki after being crippled by Kilik due to their fight. It's full potential was revealed, alongside with the abilities of the Sonia Road, in Ikki as the new Wind King, and Ringo, as the successor of the Thorn Queen - Rika, in their battle. Ikki was seen capable of floating above the water using a dense wall of air on the water's surface. He then unleashed a huge force of wind that could even carry rocks and iron bars, thus using the Infinite Airdoor: Moonstruck Drop - Bagram. But this was a Regalia Hako made herself to prove that she's better than Kururu, the current Pledge Queen of the Ring Road and replaced it with Kururu's. Hako's version was easily dismantled after being used by Ikki. It was just a prototype and collapsed after using the Infinity Atmosphere twice.

The original was then stolen by Nike , along with Hako to become Sora's tuner, in the orders of Sora and was implanted along with the other 20 regalia's stolen from the First Generation Gravity Children in his A-T tuned mechanical legs to regain his title.

Bagrams 1st form is a basic wheel-like state, with the wheels consisting of separate sections. It allows for high speed air riding, instantaneous midair direction changes, and riding on air of different temperatures. It is also capable of making a dense air surface against any surface, like water for example. Thus, granting floating abilities.

Bagram's 2nd form is accessed by feeding wind into the core using the arms. The skull emblem glows and Bagram extends its wheels into wings. This form gives access to high speed wind gusts.

Bagram's 3rd form is accessed by forcing a massive amount of air into the core using a series of quick sweeping kicks. Bagram's sections space around the feet and resemble talons. This form is used for powerful attacks. 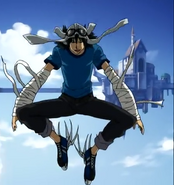 Sora's Wind Regalia in its Third and most powerful form

Infinity Airdoor: Moonstruck Numberless Grappler - grants the rider to create a massive air current that is capable of creating a wall of debris, even slabs of rocks or steel could also be carried by its force due to its accelerating speed and velocity.

Pile Tornado - The rider gathers the wind in their hands and then turns them in a circular motion making something that looks like a small tornado. They then kick the air with their A-Ts sending a powerful, horizontal tornado.

Limited Express - The rider uses Pile Tornado and then jumps into the tornado after they have created it. After this they ride the inner walls of the tornado giving them an extreme burst of speed.

Moon Drop - The rider uses the final principle of the Wing Road to interface with the air and moulds wind into dense air.

Wind Barrier - The rider creates an extremely dense wall of air in front of them.

Air Beam - the rider fires off a beam of what seems to be compressed air. The air takes the form of a laser straight beam. It resembles the stance taken by Gabishi and the tricks have a similar form. However it may be relted to the combo attack used by Takeuchi Sora alongside Black Burn in his Sleeping Forest days.