The Wing Road is the first road introduced in the series as seen when Ikki rides on it in his battle against skull saders.

Wing Road riders are considered the rarest type of riders.

There are several variants of the Wing Road.

The Wind Regalia Moonstruck Drop Bagram makes it possible to ride many paths of air invisible to others, and is truly comparable to flight. Bagram's 1st form is a basic wheel-like state, with the wheels consisting of separate sections. It allows for high speed air riding, instantaneous midair direction changes, and riding on air of different temperatures. Bagram's 2nd form is accessed by feeding wind into the core using the arms. The skull emblem glows and Bagram extends its wheels into wings. This form gives access to high speed wind gusts, comparable to natural disasters. Bagram's 3rd form is accessed by forcing a massive amount of air into the core using a series of quick sweeping kicks. Bagram's sections space around the feet and resemble talons. This form is used for powerful attacks.

In short, this regalia's core name will be Bagram. This road's Infinity Atmosphere will be Infinite Air, where the air surrounding the user's will become an infinite path possible to be "walked" upon as in the ground. The Infinity Atmosphere's trick is Moonstruck Drop - Numberless Grappler.

After Bagram was stolen by Takeuchi brothers, it was incorporated into Sora's artificial legs. 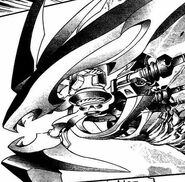 Bagram is the name to a city in Afghanistan as well an Air Base. The town of Bagram also sits right next to Bagram Air Base, which is the largest U.S. military base in the region. The location of this historical town made it a key passage from Ancient India along the Silk Road, leading westwards through the mountains towards Bamiyan. 'Moonstruck Drop' refers to how in Greek mythology that the sky was created when the moon dropped.

Although the Wing Road is said to be the rarest among all riders, some say that there are more known Wing road riders than any other road. But it's not true the wing road has many various different ways to be on for example the gale road. It's rare to see the real wing road that runs a low pressure by breaking the barrier front. the rider that may also dissipate impact forces throughout the body.